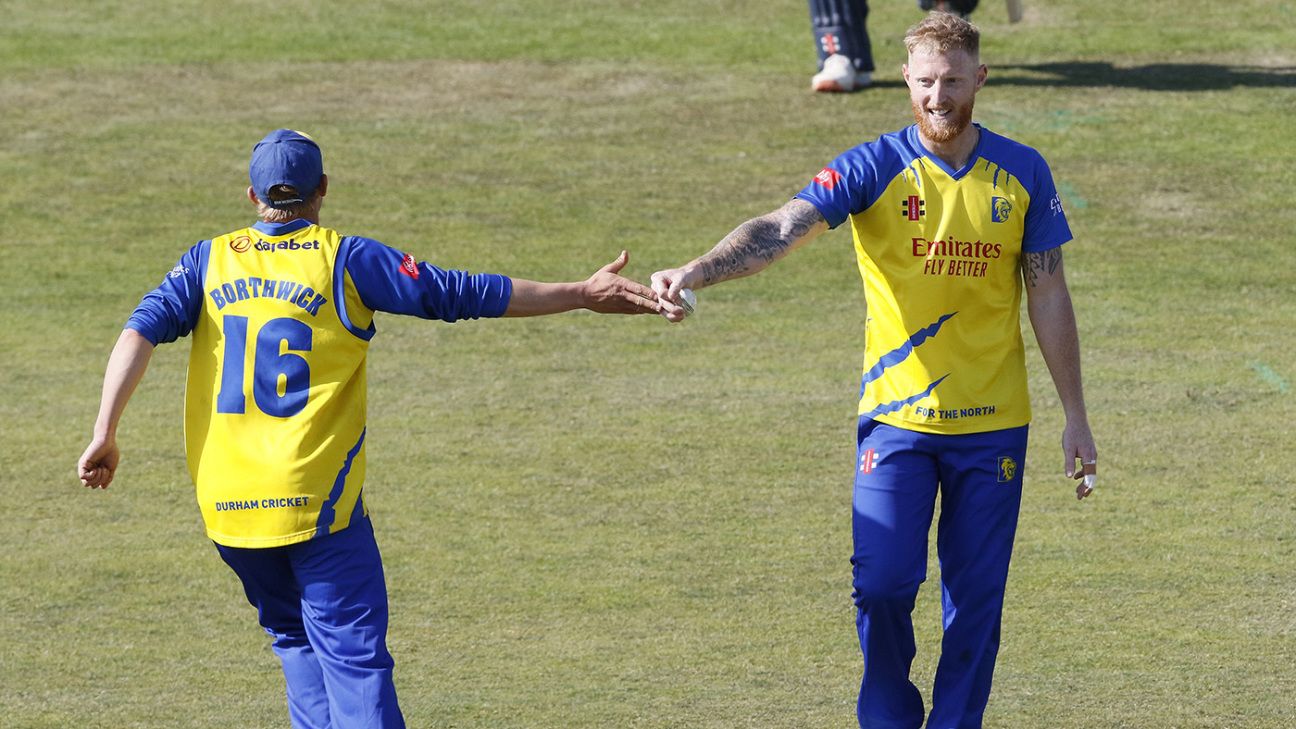 Returning England allrounder hits 29, to go with 1 for 20 and two catches in the field

England can rest easy again. Ben Stokes is back in business with bat, ball and in the field. Unless further misfortune strikes, he can be expected to return for a one-day international against Pakistan in Cardiff on July 8. It is probably on his calendar already: Bear No Longer Has Sore Head.

There were some other Bears with sore heads, though – and they were heading back to Birmingham with a 22-run defeat after failing to chase down Durham’s highest score of the season in the Vitality Blast. They have now been joined at the top of North Group by Durham and Yorkshire, and both have a match in hand. Lancashire and Notts, who tied at Old Trafford, are only a point adrift.

Durham will hope that Stokes’ presence can fire then into the quarter-finals. In theory, there is no reason why he cannot be available for their next five T20 matches, concluding with a home fixture against Leicestershire on July 2 – fully six days before the start of England’s ODI series against Pakistan. Even now, though, there will be voices within the ECB calling for an emergency delivery of cotton wool to Chester-le-Street.

It has been a dispiriting period of inactivity for Stokes, who at 30 is at the peak of his powers, yet who has played only half of England’s matches since the start of 2020. He has missed the last two months after undergoing surgery on a finger fractured while fielding in his opening match for Rajasthan Royals in the IPL in mid-April.

An unbridled 29 from 18 balls, a catch to dismiss his old adversary, Carlos Brathwaite, which as good as settled the match, and the wicket of Sam Hain in the penultimate over to conclude an economical four-over spell of 1 for 20 represented a good afternoon’s work before a Covid-restricted crowd of 4000 which saw a continuation of Durham’s best T20 season for years.

Just to see Stokes in a Durham shirt once more was reward enough. He had not played for Durham since August 2018, a home defeat in a Blast quarter-final against Sussex. He has returned, as combative as ever, to the county at a fortuitous time as they fear further disruption with several members of the squad self-isolating after a member of the backroom staff tested positive for Covid-19. Two Scotland players, Kyle Coetzer (a familiar face of old) and Ally Evans, have been recruited on short-term contracts as cover, although neither were needed.

On three occasions this summer, Durham have posted more than 180 at Emirates Riverside, and once again it was a formidable total. Brydon Carse also played a central role in its defence. He returned a T20-best 3 for 30, including Brathwaite, who had got off the mark by flat-batting him imperiously over long-off for six, but whose drive three balls later picked out a jubilant Stokes on the edge of the circle at mid-off.

Those who had yearned for a final-over shootout between Brathwaite and Stokes in a re-run of the climax to the 2016 World Twenty20 final were therefore to be disappointed.

Brathwaite was not Stokes’ only catch, however – and the first, to dismiss, Ed Pollock, told that he has no lingering doubts about his finger. He is made of sterner stuff than that. Stokes chased 20 years back from the edge of the circle at mid-off to catch Pollock as he flayed Carse down the ground, completing an expertly judged take over his right shoulder with an athletic roll which indicated that he has been far from idle during his enforced absence.

Hain marshalled Birmingham’s innings, as so often. He is a clinical judge of a run chase, and is in good enough form for some to imagine that Ian Bell’s county record of 580 runs in a season is under threat. But his 35 from 29 balls was increasingly a cry for help, and although it came alongside a late blitz from Tim Bresnan, who did some damage to Scott Borthwick’s decent spell of legspin before falling short of long-on at the third attempt, it was not enough.

Stokes’ contribution with the bat had an intemperate feel, even allowing for a T20 Powerplay. He was determined there would be no feeling his way back – there is no time for that in T20 – and his most memorable shot, a straight hit against Bresnan, could not have been more muscular. He fell reverse sweeping Brathwaite – that man again – caught at the wicket and toppling over like a man falling off a roundabout.

His departure left Durham 46 for 2 after 5.3 overs, his early adventure failing to tilt the match decisively. There was a prolonged job of work still to do and Cameron Bancroft, Durham’s Australian, provided it with a judicious 76 from 53 balls, his first T20 half-century of the summer.

The feature stand was 88 in 54 balls with Sean Dickson, who surprisingly has never made a T20 fifty in England (his only one came in South Africa) and who fell for 30. Had he managed a hearty smack as he reverse-swept Dan Mousley, Birmingham’s offspinning allrounder, he would have reached new heights, only to miss it and see his stumps spreadeagled.