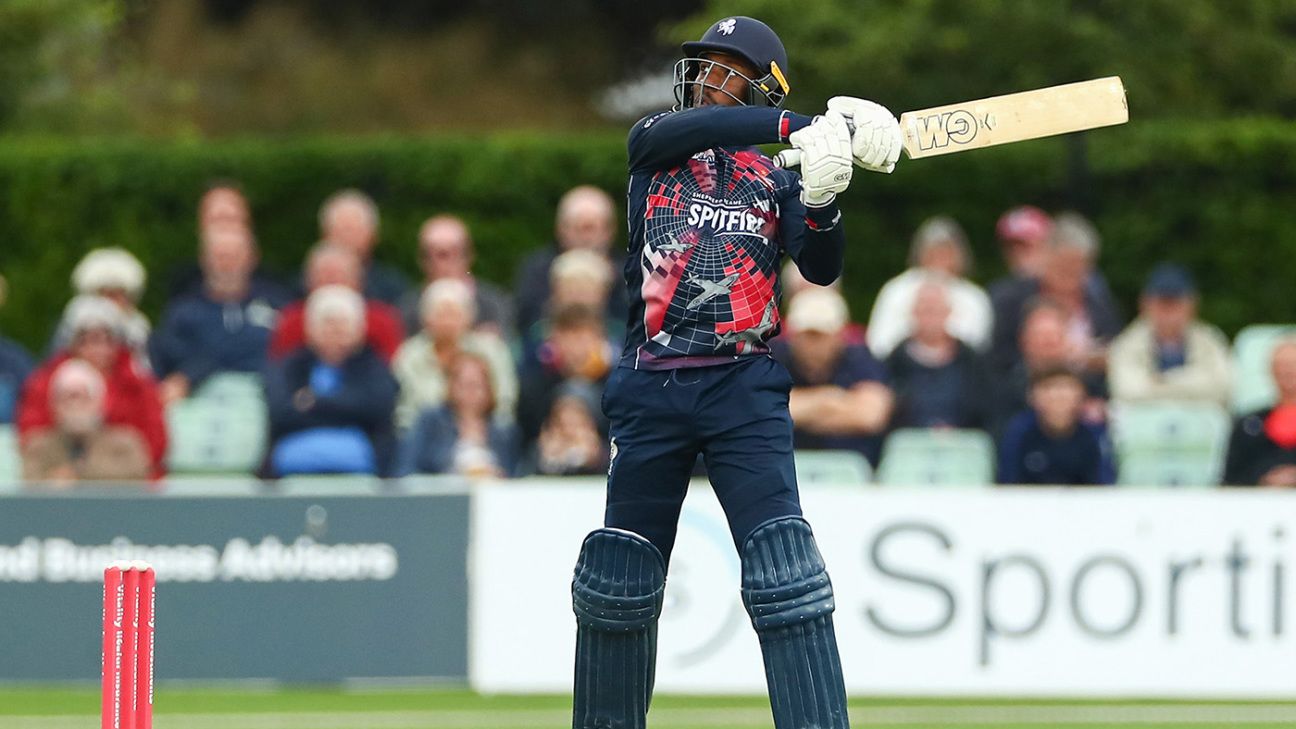 Kent Spitfires thrashed Essex Eagles by 67 runs in a record-breaking Vitality Blast win at Canterbury. A blistering display by openers Zak Crawley and Daniel Bell-Drummond made Essex rue their decision to bowl first after winning the toss, as Kent posted 236 for 3.

Bell-Drummond smashed 88 from 44 balls, including six sixes, while Crawley cleared the rope four times on his way to 69 from 39 balls. After a mini-wobble, Jack Leaning’s 42 not out from 17 steered Kent to their highest-ever Blast score. Leaning then took 3 for 15 as Essex were all out for 169, Adam Wheater their top scorer with 46.

The start was delayed by an hour due to a wet outfield and the visitors made a poor start, Wheater missing two early chances. He could have stumped Crawley when he was on nought and subsequently dropped him on 34.

Bell-Drummond reached 50 with successive sixes off Aron Nijjar and Kent had reached 145 in the 12th over when Crawley was finally lbw to Paul Walter.

Bell-Drummond survived till the 16th when he was caught by Wheater off Sam Cook and Denly fell for 8 in similar fashion, slashing at Jack Plom. This slowed the scoring rate slightly but Leaning hit 25 off the penultimate over from Jimmy Neesham and Alex Blake added an unbeaten 16 to steer Kent past their previous record Blast score of 231.

Essex initially kept up with the run rate, but lost wickets too frequently to seriously threaten. Denly bowled Will Buttleman for 8 with the fourth ball of the innings and Dan Lawrence then chopped Grant Stewart to Qais Ahmad for 16.

Michael Pepper holed out to Darren Stevens and was caught by Blake for 7, before Leaning produced a brilliant catch off his own bowling to remove Neesham for 1, holding a violently-struck drive. Cox stumped Ryan ten Doeschate off Leaning for 1 and Leaning then bowled Walter for 8.

Ahmad dismissed Wheater with his first ball, caught by Blake at long-on and Simon Harmer went down swinging with 31 before he was caught by Leaning on the cow corner boundary, off Fred Klaassen. Plom was caught behind for nought off Matt Milnes, who secured an emphatic victory for Kent when Blake sprinted in from the long-on boundary to dismiss Cook with four balls remaining.